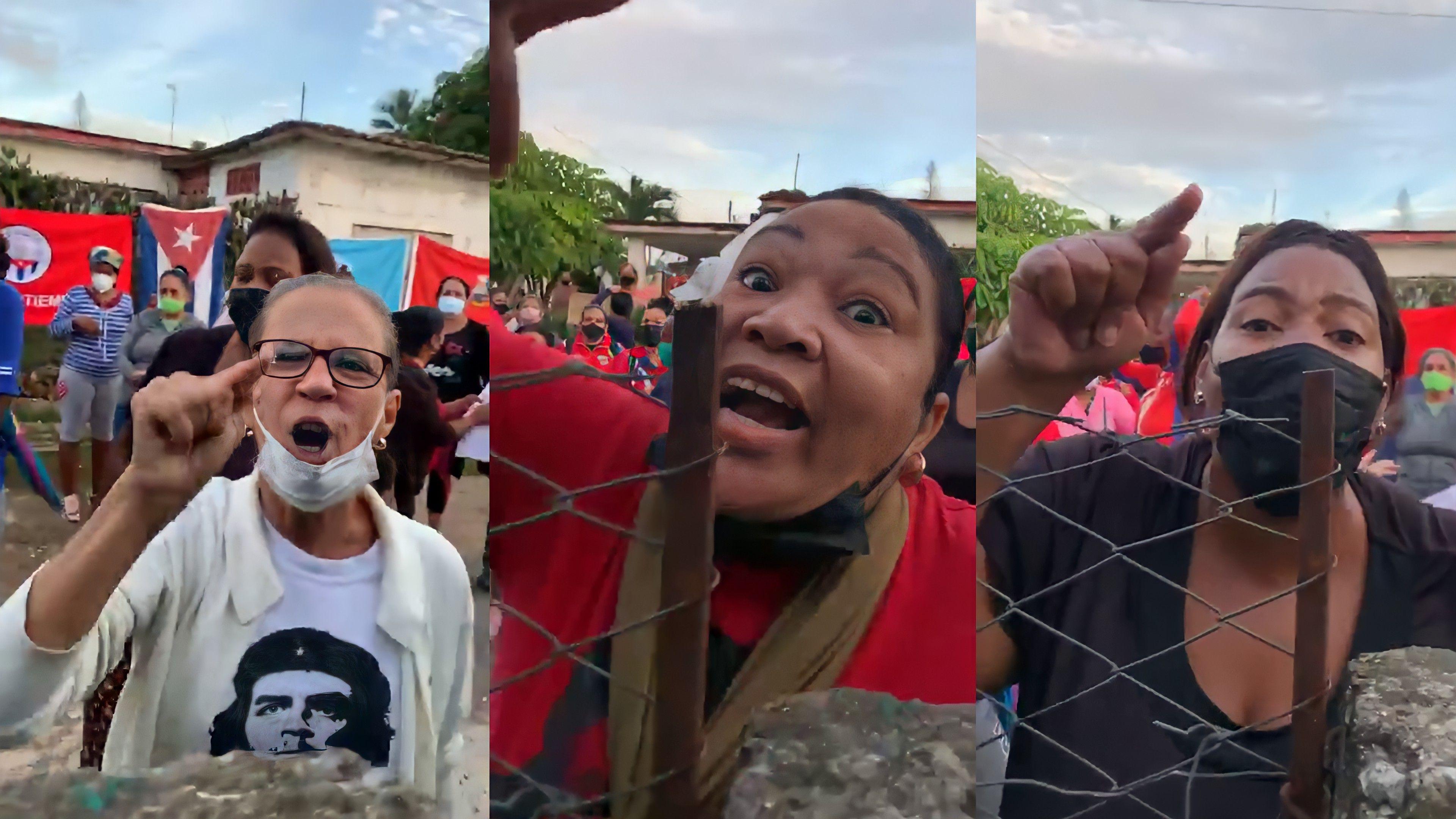 On November 15th, the day the Archipielago platform had chosen for the Protest for Change, well-known members of this group and other civil society actors woke up to a police cordon around their homes.

From Santa Clara, entrepreneur and activist Saily Gonzalez reported a hate rally against her. Outside her home, dozens of women with Cuban flags and women from the Federation of Cuban Women (FMC) threatened her at the top of their lungs. The young woman wasn’t able to leave her house at 3 PM, which was when the protest – declared “illegal” by the Government – had been scheduled to take place.

In a video that Saily posted on her social media, you can see her hanging out white sheets while the mob insults her. Yahima Diaz, an admin at Archipielago, also woke up under siege by plainclothes officers, the platform reported. Other members from Archipielago suffered hate rallies, were arrested or prevented from leaving their homes.

Playwright Yunior Garcia Aguilera, the initiative’s leader, was blocked in his apartment in the La Coronela neighborhood of La Lisa, Havana, by dozens of people who positioned themselves outside his building to shout out slogans. Garcia had announced that he would walk alone on Sunday, from El Quijote Park, in Vedado, to Havana’s Malecon. He had been isolated since Sunday; but journalists from EFE managed to make it to his home on Monday.

Garcia was kept in isolation at home on Monday, is still under police surveillance, and is “sick with a migraine”, a family member told EFE.

It’s been over 48 hours since the last time there is any news from Daniela Rojo, an Archipielago admin. Art historian and activist Carolina Barrero was arrested as she left her house, after months of being under police siege. Former political prisoner Angel Moya and Ladies in White leader, Berta Solar, were arrested Monday morning, her daughter reported.

In Santa Clara, the family of Andy Garcia Lorenzo, who was arrested for having protested on July 11th, also suffered a hate rally at their home, where they had placed a sign on the building’s facade reading “Freedom for Andy”.

Meanwhile, Diario de Cuba reported that “a group of plainclothes officers and two women dressed in military uniforms took the Miranda Leyva brothers by force in Holguin, when they went outside to protest.”

Yoani Sanchez, the managing editor of 14ymedio, reported her Internet access had been cut and later that “there is an operation made up by ex-military and retired Communist Party members, as well as CDR members, surrounding the newspaper’s offices. State Security agents dressed as civilians could also be seen at the building’s exits.”

The Cuban Observatory of Human Rights (OCDH) reported at least a hundred repressive acts thisj past weekend, in order to prevent people from taking part in these protests.

Police presence has been reported in the downtown of cities in different provinces.

Patrick Oppmann, CNN’s correspondent in Cuba, tweeted that unlike July 11th, the Government was ready for today. Any small group of protestors will probably be arrested, swiftly.

State-controlled media have focused their coverage on the country reopening its borders to tourism and primary school students going back to school after months. Like in similar episodes last year, it’s social media, the independent and foreign media that are providing information about what is happening to those who dissent.

Prestigious composer and guitarist Leo Brouwer shared a video on his social media to support the Cuban people and condemn Government actions against those who dissent.

“I support every Cuban – this includes myself – who is asking for a better country (for this freedom of speech we are born with). Now that we are doing this, it should be done with dignity and respect, without manipulation, hate, and much less clashes between Cubans,” he said.

“I am asking for us to reclaim lost values and the ones that we continue to lose today (from the most common to the most sophisticated). It’s sad for me to refer to Cuba as a country of “no’s”. As a lost, sunken island… where nothing is possible, where everything is censored and criticized behind an inquiring power that repudiates anything that doesn’t suit it. I would like today’s and future generations of Cubans – wherever they are – to be proud of their birthland. I join my colleagues, artists and the general population, I don’t want any more devastation or suffering. Enough!” the artist ended.

“Yo repudio los actos de repudio” (I hate hate rallies) singer Haydee Milanes shared on her Facebook profile on Monday. Transformed into a sign, the phrase has been trending between Cubans who condemn government actions against Archipielago members, artists and activists, who have had groups of people related to the Government and plainclothes officers from State Security gathered outside their homes to shout slogans and stop them from leaving.

Haydee, who has criticized human rights violations in Cuba, shared a white rose on her Facebook profile this weekend, along with a verse from Amame como soy (Love me as I am), one of her father’s hits, singer-songwriter Pablo Milanes.

Cuban singer-songwriter publicly expressed his support “for playwright Yunior Garcia Aguilera and every Cuban who is fighting in and outside Cuba.”

“It’s beautiful to see us come together and express our demand for absolute freedom with flowers,” he said along with the lyrics for his song Flores del futuro (Flowers the future).

Cuban pianist Chucho Valdes demanded freedom for all Cubans and used the hashtag #15N at the end of his post, supporting those the Government stopped from protesting peacefully on Monday.

The musician remembered his time as a young man when Fulgencio Baptista’s police would repress university students. “In 1959, it was promised that these kinds of things would never happen again, that there would be freedom of speech and free elections. We believed them, of course, but the images I see today are incredible,” he said.