The Only Two Women to Announce Cuban Baseball Games

By the mid-’60s, mass media had already been nationalized in Cuba. Back then, there was a rat race to get hold of professionals and fill the gap left by journalists and hosts that had left the country during the immigration wave that ensued after the triumph of the Cuban Revolution.

Sports programs didn’t escape the crisis. So, a training course was created for commentators and hosts, which would be judged by influential media celebrities. Over 300 people applied but only 40 were enrolled onto the course, and only 15 graduated, Rene Navarro (one of the students to graduate from that initial course) said in an interview with Julita Osendi, which was published on Cibercuba.

Navarro said that his classmates included Hector Rodriguez, Diego Mendez, Jose Daniel Quevedo, Roberto Pacheco and only one woman, Mercedes Moreno. They practiced at COCO (a radio station in the capital) throughout the year, where they helped cover school games, as well as provincial and national series baseball games.

At COCO, Mercedes made her debut as the commentator of the country’s greatest pastime. She graduated in Journalism in 1969, and her talent was enough to position her as the first woman to announce baseball games.

Very little is known about her work as a sports commentator, maybe because she was also one of the first people to push for independent journalism in the country. Even though she officially left national TV in 1992, Mercedes confessed in an interview with Nancy Perez-Crespo that she assumed her political stance in 1980, after some 10,000 Cubans invaded the Peruvian Embassy in Havana and the Mariel exodus began.

Mercedes joined the dissident group “Movimiento Armonia” and gave shelter and resources to other opposition members and independent journalists, maybe because she had experienced the government and society’s marginalization firsthand, as she was married to a former political prisoner.

She was a reporter for Cuba Press and the Buro de Prensa Independiente. After leaving the latter, she founded and directed the Agencia Nueva Prensa.  [We were unable to find a picture of Mercedes Moreno to include with this post.]

Do you still not know who Melissa Blanco is? 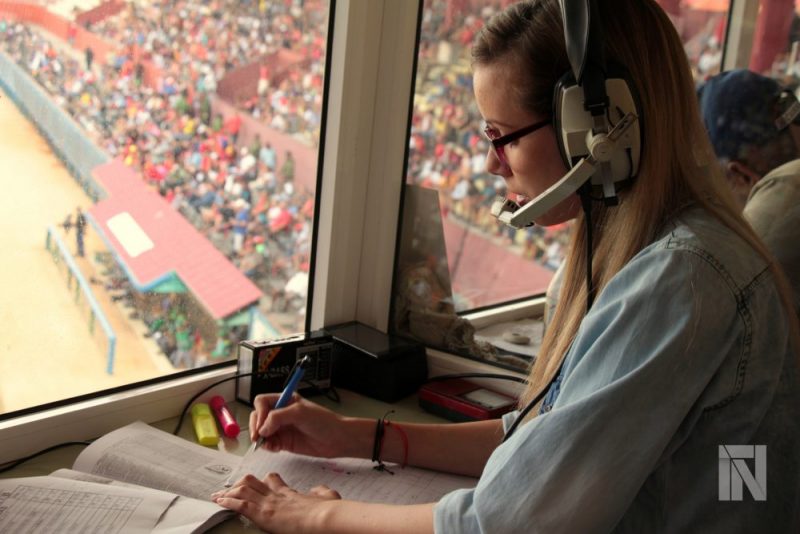 Before every baseball game, Melissa looks for and studies stats for baseball players in the League and other categories, which is something she believes enrichens her commentary and something her radio listeners enjoy.

It’s August 15, 2019 and something unprecedented has happened in Matanzas: amidst the normal commentary broadcast by Radio 26, which is hosted by a man, listeners begin to hear a young woman’s voice more and more. Melissa Blanco’s voice takes on the mythical tone of the siren’s song.

Everybody crowned the young 21-year-old woman as the first female commentator in the history of the National Baseball Series, maybe because it’s not at all normal to hear a woman announcing a baseball game in Cuba. However, Mercedes Moreno came before Melissa.

Melissa, who is still studying the fifth year of her Journalism degree at the Universidad de Matanzas, doesn’t seem to care about being the first or the second. She tells Tremenda Nota about how she found out about her predecessor, without any reserve.

“The most important thing for me has been the reaffirmation that we women can do this. You don’t need to be of a specific gender to announce baseball or any other sport. Which is why I believe that Osendi’s statement was very valid, Osendi being a paradigm of what we like in sports journalism,” she admitted.

Melissa takes her work in the booth very professionally. She places her many notes on the table. If they are important, she underlines them with green or pink highlighter. She looks for interesting and additional facts that can help to make her commentary more exciting. She does all of this with great fluidity, as if she’d been doing it for years already, although her adventure in sports commentary only began quite recently.

Her first time in a radio booth was during the pre-season games, in July 2019, when her colleague Alejandro Castellanos gave her the mic for three innings during the game between Matanzas and Industriales.

After showing her great skill, it became clear that the opportunity would come for her to establish herself during the National Series.

“On August 15th, Dayron Medina let me choose between the sixth and the seventh inning in the game between Matanzas and Cienfuegos. I had rehearsed with him before, and that day he said: “Well, get ready, you’re going to announce live. I was so very nervous, but if he gave me the opportunity it was because I was ready, so I took hold of it.”

After her first official game ended, she was really nervous on her way home because she didn’t know how listeners were going to react. Her greatest fear was rejection. Some people in the stadium had asked her how she was going to announce if she was a woman.

“I had many doubts because, regardless of my dedication and hard work, if the audience doesn’t like my work, then I can’t force them to listen to me. But when I connected to the Internet and checked Facebook, I had a flood of positive comments, tips and messages of congratulations.”

According to Melissa, the hardest thing about announcing baseball on the radio is trying to fill the silent spaces. She has to keep the dynamic, intonation, pace of the game going to keep the listener tuned in, to pay attention to every little detail on the pitch, because every movement is important and people at home want to know everything that is happening.

Her passion for this sport began two years ago, when her father took her to her first game, without her mother knowing. But her love for announcing began one day when she was at the Victoria de Giron stadium in Matanzas when she went up to the booth and saw the euphoria of the commentators as they described what was happening on the pitch.

“That was the moment I knew I wanted to do this job. I was aware that baseball is a very machista sport, but it wasn’t exclusively for men at this time. Why would their commentary have to be?”

Ever since she was little, Melissa would go to the stadium every time the Matanzas team played.

Melissa’s greatest wish is to announce sports for the rest of her life. Baseball, volleyball, football, basketball. She wants radio listeners all over the country to become familiar with her voice and recognize her work as a sports commentator because of her talent, not just for the simple fact that she is a woman.

“It implies a lot of sacrifice. Most young people my age are going to parties, the beach, hanging out, and I really have given up lots of things. But I believe it’s necessary to exceed yourself professionally every single day, if you want to get anywhere in life. I’ll only be able to accomplish another one of my dreams if I work hard: go to the Olympics, World Championships and other international events.”

While Melissa isn’t the first female sports commentator, her presence on Matanzas airwaves has opened the door for other women to get their foot into a profession where talent should be taken into account first and foremost, above gender, political or ideological.

The Logic of Cuba: You’re Not Supposed to Understand