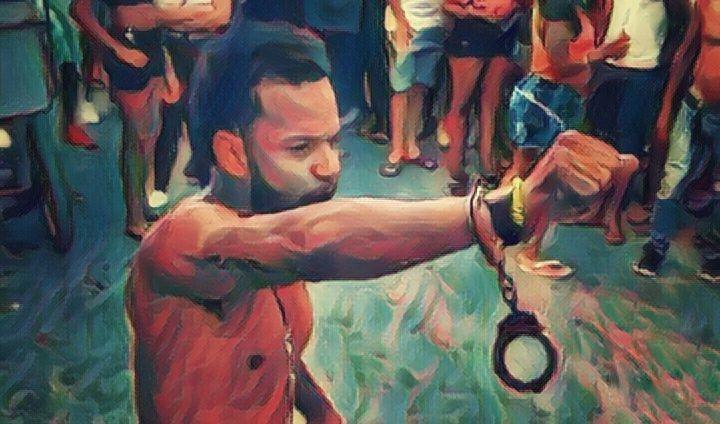 San Isidro: A Child, a Street, a Country

San Isidro is on fire. It has become a street swollen with cries and raised fists, with a pair of handcuffs hanging off them. San Isidro is radiating. With thousands of eyes answering screens back, in chaotic direct broadcasts that go straight to the heart and wake you up. San Isidro is exploding. Because the steam that isn’t let off and the bridge that isn’t extended will end up blowing up the impossible.

San Isidro, this marginal neighborhood in Old Havana that reminds us how all of us are living on the brink, has made headlines again. People living there – who hear TVs talk about soft blows at 8 PM, in color, and the next day go out and struggle to find their next meal, in black and white – have understood and accepted the language of a blocked game of dominoes.

San Isidro is hurting because Cubans are pitted against other Cubans, in a scene that is filmed, disinherited, and praised by other Cubans. A sinister dilemma that maybe those who have been receiving blows all their lives will come out of this even more beaten up. Meanwhile, those who have been lucky to give the blows will be praised even more. Or maybe not…

Who knows whether this is the only visible and accessible path for someone on Mount Olympus [The government, the Communist Party] to hear us for once, forcing them to hear us, and begin to fulfill their old promise of changing what needs to be changed.

Like many Cubans, I’ve had San Isidro in my throat for a few days now. Out of this entire neighborhood, this neighborhood with spurs that took one of their own out of the mouth of the police, one image has shaken me up. It’s the image of a man, a father it seems, who is trying to get in the middle of the boisterous pushing and shoving between the police and the rebel, with a little boy in his arms. A little boy!

Irresponsible might be the first adjective that comes to mind. But it’s not enough, because every responsibility accepted or not has a back story. A chest of drawers of experiences that condition it and give it enough gunpowder to explode or the balsam it needs to remain contained.

What might throw a father into the middle of this commotion, with his son in his arms? How do they live or survive, this father and child, in an atmosphere of oppression and harsh arguments? Do they have a home and family with the basic level of comforts and harmony? What do they eat? How often do they eat? Do they dream? Are they happy?

As to the little boy, is this the first scuffle he’s been in or has he already suffered – alone or with his father – other riots on the street and the dilapidated tenement? How afraid is he in the night? Does he sleep alone in a crib or does he sleep with adults in their bed? Does he have toys? Does he talk to them?

The San Isidro Movement doesn’t have a political agenda, some people reproach them from their comfortable academic armchairs. Nor does it have a leadership that has been accepted by a general consensus that might command a definitive flood in this country. I’m sure these critics are right, a little bit.

However, San Isidro has never intended to be this avant-garde. It only wants to be – and manages to be with every action – the flame, an engine, the bullet to end this unbearable disgrace. The physical presence of bodies, of women, men, the elderly and children there, prove plenty of experience.

Another country isn’t built upon the foundations of insults and cockiness, the straitlaced say. I’m sure they are also right, a little bit. But only a little bit, because it seems nothing is built without cockiness and only with civic spirit either. At least not on an island where so many words have been buried.