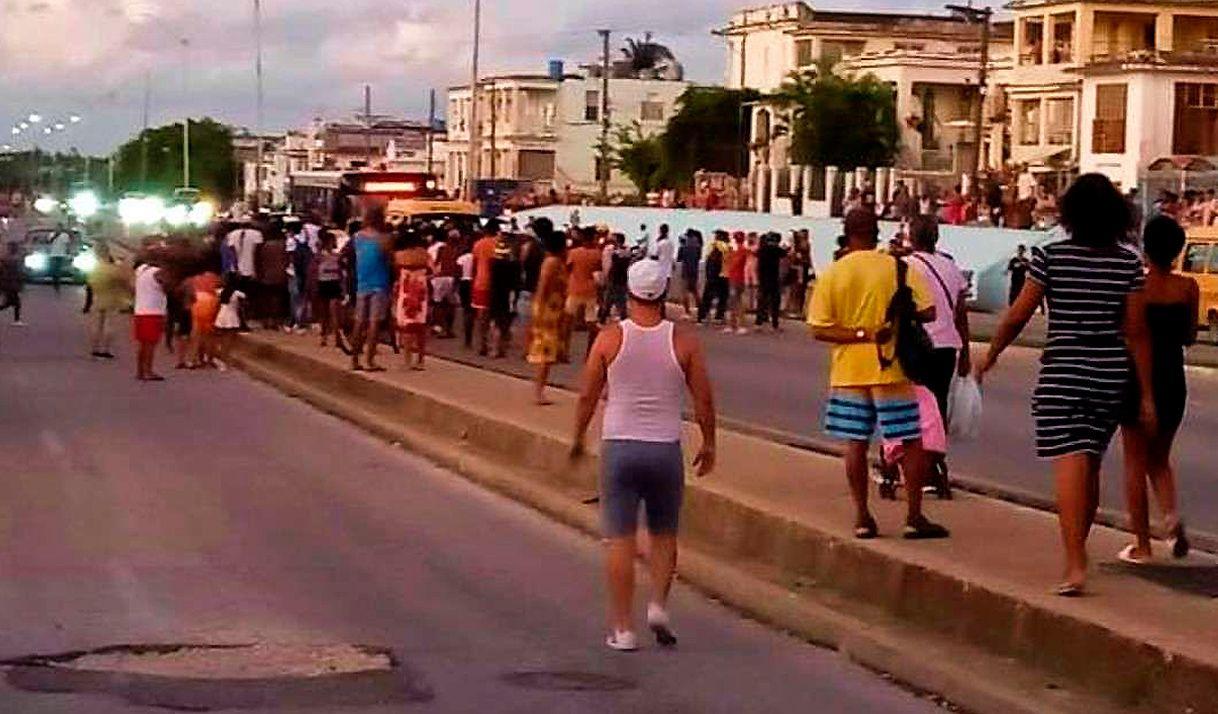 Since September 29, more than 30 protests have been registered in Havana. Photo: screenshot.

The Protest Demands in Cuba: Electricity, Water and Freedom

The nationwide blackout that occurred on September 27th in Cuba has unleashed a wave of protests in various provinces of the country. The main ones have occurred in Havana, where several residents report up to 100 hours without electricity.

The authorities insist that they are working “intensely to restore electricity to all customers” – saying that at noon Saturday 94% had service. However, in various parts of the city people took to the streets due to the lack of electricity, food spoilage, problems with the water supply that requires pumping, and the suspension of the liquefied gas service.

On some streets and avenues, families blocked the way with tree branches and fires were reported at some roadblocks.

State authorities have appeared at the protest zones to “explain” why they do not have service; however, in some cases the power has been restored after the protests or they have been promised incentives such as “bags of food”, according to what President Díaz-Canel told the residents of Batabano.

At two in the afternoon on Saturday, four days were completed without electricity in the apartment building where journalist Luz Escobar lives. She works for the online newspaper 14yMedio. “When it comes to an apartment building with many floors, that needs to pump the water to the apartments on the upper floors, water is also scarce. It is not only that you do not have electricity and you cannot charge your cellphone, you also cannot refrigerate your food that rots and then you have nowhere to buy it. You simply don’t have water either, you can’t clean, you can’t take a shower, you can’t mop if you don’t look for water. If you have a source below, carrying it in buckets and other containers up eight floors, ten floors or more, is quite difficult. The scenes we are seeing make me very sorry,” Escobar wrote.

Since September 29, Proyecto Inventario has registered about 30 protests in some 26 neighborhoods of Havana. On October first street closures were used as a strategy to attract attention, such as at Zapote and San Luis Streets in Havana’s Diez de Octubre municipality.

However, Havana was not the province most affected by Hurricane Ian, which crossed the far west of the country as a category three storm on September 27, 2022. Where has the Cuban Government put the resources after the disaster caused by the hurricane? Pinar del Río was the most devastated province, but it has not been the top priority. Only 69 brigades are working to restore electricity in that province; however, 100 brigades work in Artemisa and 121 in Havana.

According to data from the Cuban presidency, in Pinar del Rio, the westernmost of the Cuban provinces, 1.6% of electricity has been recovered, which represents some 3,700 customers; meanwhile they say in Artemisa, 38% of the electricity service has been restored, in Isla de la Juventud 98% and in Havana they say electricity is restored to 100%.

The leak of a request from the Cuban government to its US counterpart has also drawn attention in recent hours. The news outlet The Wall Street Journal reported on a rare request for help from the Biden Administration after the devastation of Hurricane Ian. The newspaper assures that Washington is evaluating how much assistance the island needs, because apparently an exact amount was not requested, via email.

On Saturday, users on social networks notified the cancellation of flights at the José Martí International Airport in Havana. CNN journalist Patrick Oppmann confirmed the cancellation of American Airlines flights between Miami and Havana at 5:03 p.m. (flight AA1345) and 6:58 p.m. (flight AA2699). Oppmann points out that the airlines informed the passengers that the reason for the suspension was “power issues” at the Havana airport.

An El Toque collaborator from the Cuban capital shared information on the cancellation of flights AA838, scheduled for 6:15 p.m., AA2483, at 7:15 p.m., and AA2696, corresponding to 9:10 p.m. Likewise, flight PU895, from Plus Ultra to Brazaville, Congo, at 9:00 p.m., also appeared cancelled. However, Ecasa, a Cuban company in charge of caring for aircraft, passengers, and the facilities of the country’s airports, does not update its Telegram channel on the cancellation of flights. Its last publication dates from last September 28.

Death due to injustice and new protests in Cuba

On September 28, 2022, political prisoner Andy Reyes Cruz died in prison, reportedly after a prolonged hunger strike. New citizen protests are registered in the archipelago after the total blackout caused by the passage of Hurricane Ian.

The almost total blackout of communications in Cuba on the nights of September 29 and 30, has been another of the recent difficulties. The .cu domain sites were totally out of service during the outages. This could be interpreted as a measure by the Cuban government to prevent the spread of protests and the public message of denunciation.

“I dare to speculate that, if the Internet had not been cut off yesterday, [the protest] could have grown much more, especially because of what happened at Havana’s 31st (Avenida), which was a replay of July 11, 2021, not in terms of overturning patrols, but in terms of energy. They weren’t people standing still, I’m not going to say in a state of euphoria, but they seemed very aware of what they were doing. There were very determined people and that could go a long way”, reflects economist Miguel Alejandro Hayes.

Although the Cuban authorities have always avoided the term “protest” and have tried to rename the events as riots or acts of vandalism, this time they were unable to avoid reality with qualifications that diminished the relevance of what happened.

“I believe that protesting is a right, but it is a right when those responsible, the State and the Government, are failing to do what they are responsible for. However under the conditions we are talking about, yesterday’s protest, instead of helping, slow down the fulfillment of that mission and that desire we have to, to see a full recovery in the shortest possible time,” said Luis Antonio Torres, the top Communist Party official for Havana on the National TV News.

As long as the leaders remain disconnected from the reality faced by the population and value the protests as an impediment to their functions without them having a vocation of service; as long as Etecsa (the telecommunications company) does not explain or offer reasons for the repeated Internet outages; while Cuba barely survives day to day, the fear of protesting will be less and the cry for freedom will be louder along with the demands that are repeated year after year.