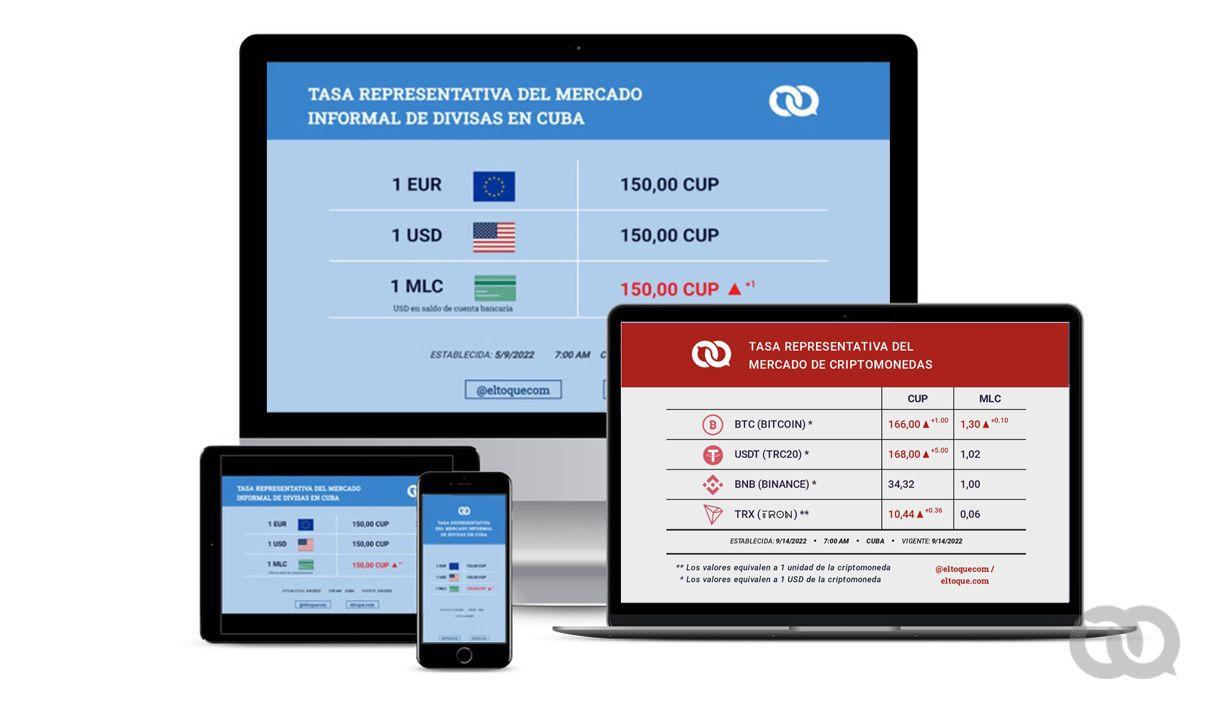 Generally-speaking, users surveyed agreed that the rate was easy to use and well presented. Many use it to make buy/sell decisions.

What is El Toque’s Currency Rate Watch Good For?

Since 2021, El Toque provides a daily representative rate of foreign currency exchange on the informal market. The tool is one of our most visited sections today and has become a consulting tool amid a situation where inflation and the economic crisis are spiraling, both with government policy supporters and detractors.

In order to improve this service, our team asked users how they use this rate. We asked people to anonymously fill in a Google form with their opinions. 302 responses were received.

Out of the total number of people surveyed, 300 people said that they knew about the exchange rate published as a reference and 244 people said they had used it in the past three months to make financial decisions within their household. Another 73 said they had made business-related decisions based on this rate.

Five trends of use were identified in the 302 responses. The first has to do with using the rate to learn about the economic situation in Cuba, taking note of the behavior of foreign currency and satisfying other information needs.

A second group of users believe the rate is a useful tool to help them make personal decisions, plan their everyday finances, organize sending remittances, learn what the rate is when collecting foreign currency to emigrate, buying products (online or physically) and to buy at the government’s stores with products priced in US dollars.

They also use the rate to define wages, value the work of private-sector workers or to establish bonus schemes; as well as to buy raw materials and supplies abroad. Individuals or business owners make up the majority of these two groups, who look at this rate before making a purchase of goods and services.

The fourth trend is made up of the people who use this rate to fix sale prices of foreign currency and supplies. “[Using El Toque’s rate] I fix the prices of products we bring over from abroad,” a user said in the survey. “When I sell a product in USD, but the buyer only has Cuban pesos (CUP), I send them a screenshot of these rates for them to assess the price,” another person said.

A smaller number of people use the El Toque rate as a way to compare it with their own currencies. When they “visit” Cuba, they use the rate to figure out the value of their currencies, informing themselves about “how much” money they need to bring to the island or to decide which currency they should bring for themselves and their families.

The smallest group said they didn’t use it because they didn’t have access to foreign currency.

Generally-speaking, survey respondents said that the rate gives them an “idea” about how the market is behaving and they use it as a reference when carrying out different operations.

The form verified that people using the rate to sell foreign currency follow three key trends: they take the exact value, or increase and reduce prices of their transactions. “I look at the rate, add about two pesos to it and that’s the price in my town. I sell some of the money I get to be able to buy food on the informal market,” a user confessed. “Lots of the time, you need to convert USD into MLC (the magnetic only currency used at state stores) or regular Cuban pesos. That’s why I always put the ad out with your daily rate. It’s obviously always a little lower (than the real value) because as soon as I put up the ad, my phone doesn’t stop ringing,” a second user said.

Another important use of this rate has to do with the decision to buy or sell. Many users said that they use El Toque’s rate to figure out when is the right time to change it for another currency. However, current numbers aren’t very promising for lots of people. “When I look at this information, the only choice I have is to wait for the number to drop,” a survey respondent said. Another user said that they decide whether to exchange it or not depending on the rate.

In regard to reliability, most people who answered the survey said they found it to be reliable. It sticks to the reality of buying and selling prices of the groups it belongs to, and people feel the algorithm is clear and easy to understand.

Nevertheless, some users explained that even though they use the rate as a reference, they prefer to check prices in buying/selling groups on online platforms, before making a decision. “I sell foreign currency. When I’m asked how much for, I tell them: “at the El Toque rate.”

In terms of adjusting values to the real rate, a user says that prices are higher in his province: “in Holguin, it’s always two or three pesos (or sometimes even more) above what you publish.”

However, others say that the price published by El Toque is higher than “street” value. “I looked at the rate to sell MLC, and thought that selling it for a little bit less was the fair price.”

It’s important to highlight that five people responded that they were aware that it is the Cuban Government’s job to sow seeds of doubt about the El Toque rate. “I use it so my mom’s money doesn’t lose any more value. Despite what many people complain about the rate not being allegedly correct on social media, these people don’t have the faintest idea about economics or are from the DSE (State Security) doing their job to discredit it,” one of the responses read.

185 users said that they could easily access this information on digital platforms, while 75 people responded “sometimes” and 50 answered they couldn’t.

In this regard, a user said: “The El Toque rate is the easiest to find. I don’t have to go group by group looking for numbers. I guess everybody does the same thing. This leads me to the conclusion that the informal market isn’t setting the rate, but you are; which is just as unjust as Gil’s figure.”

“There isn’t a better tool out there to know what the dollar’s like on the street. In fact, there isn’t anything. I make all of my exchange decisions and advise my family to do the same based on the El Toque rate,” a survey respondent answered.

Generally-speaking, users surveyed agreed that the rate was easy to use and well presented.

It’s interesting that in the following question, about what data would help them to make everyday and business-related decisions, the majority answered the El Toque rate or others, or that they had no idea.

Another group answered that it would be useful to know the price of basic products (Food and Toiletries Basket), add values of trends and forecasts of the rate, and the fluctuation of these values over time. “[I’d like] a weekly forecast based on the history of change,” one of the answers read.

Users also found maximum and minimum buying and selling rates useful, daily/weekly inflation levels, a reference of international exchange rates and historic prices of foreign currency in Cuba. “I’d like an index of consumer prices (IPC) for inflation, which could be broken down by geographical region and type of product; for example, meat, fruit, etc.,” a user suggested. Another said that they would like to see “how prices go up over time of basic products at the ration stores and on the illicit market.”

Furthermore, many users said that an official rate is needed, issued by the Cuban Government to regulate the buying/selling price of foreign currency based on supply and demand prices.

Answers also mentioned the importance of better transparency of how official data is handled. “[I’d like to know about] the number of tourists who come to Cuba and the amount of money sent to the island in remittances…”, one user asked. “For the ONEI to publish price indexes for consumers, levels of rent, [Gini] index, foreign debt, etc.,” another user asked. “Data linked to corruption,” a third user suggested.

Regarding whether El Toque has an impact on inflation, most survey respondents agreed that the publication wasn’t responsible for inflation. According “(…) to the way I see things, inflation can only be stopped with a change to the country’s economic strategy,” one of the responses read.

Users also left many suggestions about new services and tools that could be integrated. These include a mobile and computer app, which was the most repeated. They also suggested other functions beyond the daily rate: the historic rate, comparing international rates and even the chance to update the real prices of transactions collaboratively – with the audience’s participation.

The most-requested services include a locator/monitor of existence/price of basic goods and a price calculator which is updated daily. “A list of basic products and services and others, like the price of a ticket to Nicaragua or a night’s stay in a national hotel, which gives you an idea of the disaster in Cuba,” a user added.

Other suggestions included the publication of a table with taxes, rates, equations, and official contact information for MSMEs in every municipality.

El Toque would like to thank everyone who kindly gave their time to answer the form and for the collective information deducted from them.

Some of your ideas reaffirm the importance of many projects launched and the team assures you that it is willing to implement as many suggestions as it can as soon as possible. This was a relevant exercise of listening to the community, who we always come back to so we can continue to grow.

Nothing stopping Cuban govt from filling out forms incognito and forcing prices down - they are tyrants with huge control of internet. Naive to not regard their cruelty and tact to fix pricing by cloaking themselves —- You need to know Cuban govt does not like Eltoque fueling marcado market
Responder