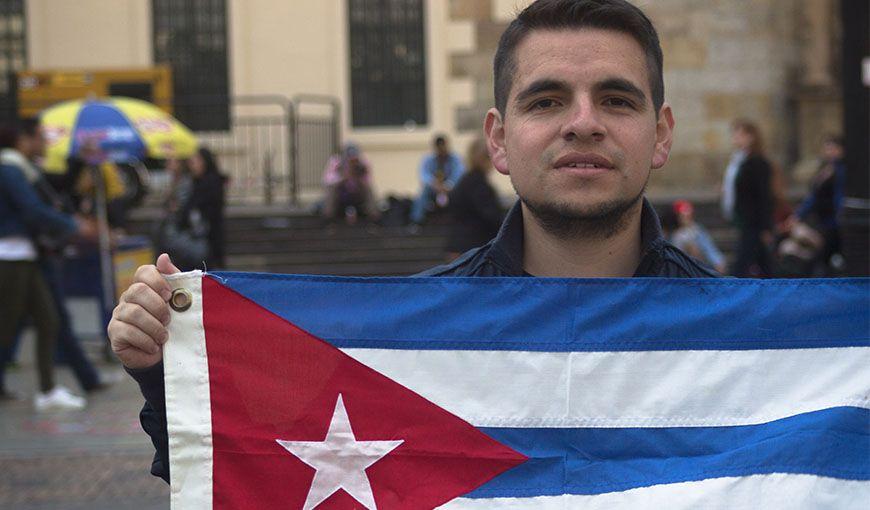 HAVANA TIMES – “I was 17 years old when I arrived in Havana,” Juan Carlos Valbuena tells me as we walk down 7th Avenue and look for a cafe that shelters us from the hustle and bustle of Bolivar Square in Bogota. He was one of the young Colombians who studied Medicine in Cuba.

Juan Carlos has a small frame; he seems just over 20 years old, at a first glance. His accent is typical of a “rolo” (as people living in this cold capital are referred to), but after talking to him for 5 minutes, you begin to pick up on the marks Cuba has left on him. He starts talking about arroz congri (rice and beans) and the Cuban vision of family medicine that he learned in his six-and-a-half-year long degree.

He was one of the thousands of young students who came to Cuba to study Medicine, after just leaving their parents’ nest. Fidel Castro’s government paid for their accommodation, meals, maintenance and uniforms even. All of which was done as part of his idea of creating a stronger medical cooperation network in the world.

Today, Juan Carlos works as a physician and consultant at Caja de Compensacion’s outpatient clinic with the most patients in the country. He lives in an overpopulated city that has almost 80% of Cuba’s total population. This is why it isn’t hard for him to put his finger on what he misses the most about this Cuba: “tranquility”, he tells me as we speak, almost shouting, in the cafe that ends up being noisier than the square.

He finished his degree six years ago and began to practice as a doctor here in Colombia. He went head first into his work, in remote areas in the Cundinamarca department. “I’ve worked in places that aren’t very popular among doctors, where nobody aspires to go, such as Supata, Villagomez, Tres Caminos. These are isolated towns without any access to healthcare, where there is a doctor for every 3,000 inhabitants.”

Then, he worked as part of the “Territorios Saludables” program, which was a project spearheaded by Bogota’s previous Mayor’s Office and visited populations at risk in remote areas of the city, such as Usme.

Juan Carlos doesn’t have a CV with positions that many people would consider “important”. And maybe that’s because being a “Cuban-style” doctor gave him another perspective on the matter: going beyond to have a social impact on a community.

Karen Chamorro shares the same sentiment and is another former medical student who studied in Cuba. She is now a specialist in Family Medicine and a professor in this subject. “The Cuban Health system is based on primary attention and in creating family doctors. They are given this name because they have a family assigned to them. The doctor lives within this community and is their gateway to the health system,” Karen says.

It’s tough for these doctors to come back to their birth country and realize that the Colombian health system is a whole ‘nother world. 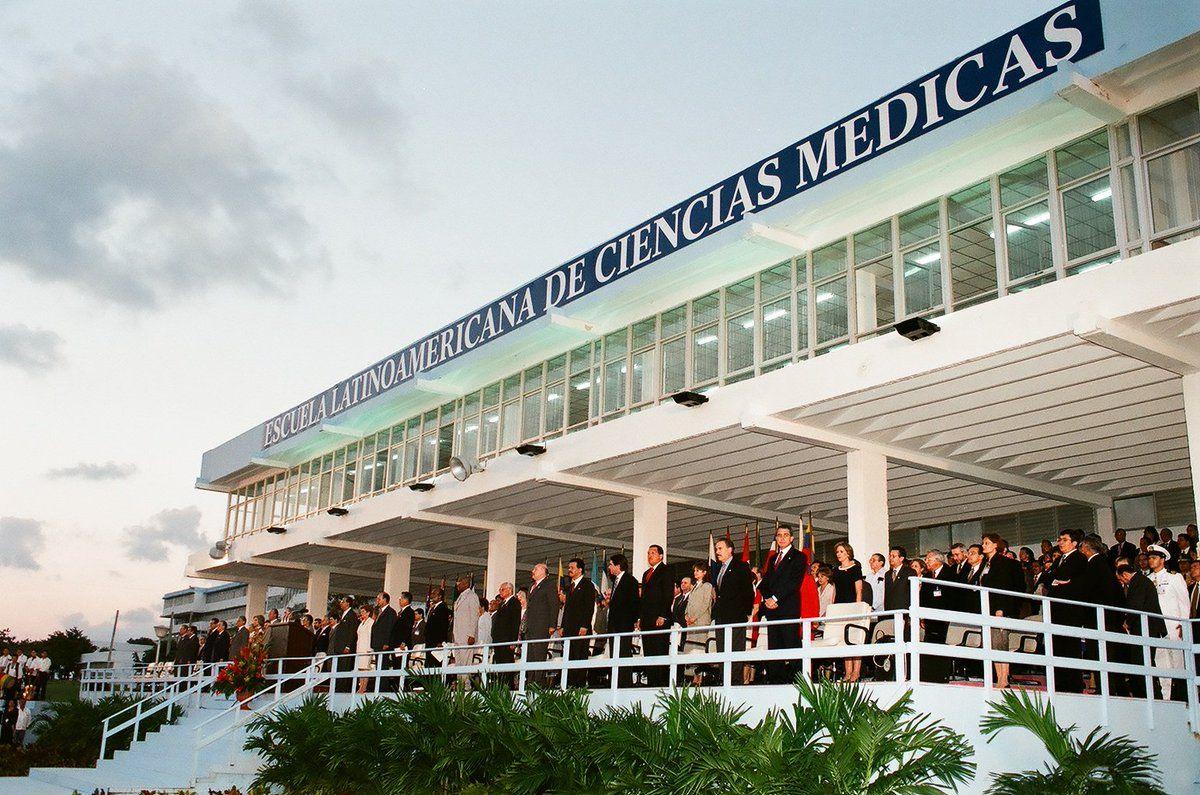 The Latin American School of Medicine (ELAM), founded by Fidel Castro, has trained up over 20,000 doctors in 90 countries. Photo: Taken from the Cuban Ambassador’s Twitter account.

“I think I still I haven’t found my feet. When you see people complaining and you can’t help them or how they manage your time, they overload you with patients and want you be to a machine, not a doctor as such, and that’s where you see the difference,” Juan Carlos tells me.

This great difference, as well as the scarce information that reached Colombia about Cuba, gave birth to the rumor within the Colombian medical community that any doctor who studied in Cuba isn’t prepared for Colombia’s health system. “I don’t know if discrimination is the right word, but I can say that in this medical circle, they always ask you where you graduated from and when you say Cuba there are many questions, sometimes positive and sometimes negative, because they question your skill and expertise. They even start talking about political matters,” Karen Chamorro tells me.

The Latin American School of Medicine

The idea of creating a network of Latin American doctors was conceived after Hurricanes George and Mitch wreaked havoc on the region in 1998, which were called the most powerful and deadly hurricanes of our modern time. After the tragedy, Fidel Castro gave a public and emotional speech and announced that the Latin American School of Medicine (ELAM) would be created, as an international university capable of providing a swifter response to these kinds of disasters.

In its early days, ELAM went on to offer grants to students from 70 different countries around the globe, from the US to South Africa. And, Colombia was one of the countries that benefitted the most from it. “Since 2000, Cuba has handed out 60-80 Medicine grants per year to Colombians. Some of them receive the grant from the Cuban Embassy and others from the Colombian Institute of Educational Credit and Technical Studies Abroad (ICETEX). After 2012, the project had served its purpose of training doctors and stopped offering grants,” Lina Murcia, director of ELAM’s Foundation of Colombian Graduates (FEDELAM), said.

Thanks to these grants, Colombian doctors offered their services voluntarily on brigades in Haiti in 2010; in Mocoa, after the 2017 avalanche; and in Guajira, treating malnutrition.

Now, these grants only go to victims of violence in Colombia and former guerrilla fighters, as a way of the Cuban government supporting the post-conflict peace process. But, that’s another story.

Farmers, people from Pasto in the south, the coast, the Amazon and even “rolos”, like Juan Carlos, came to Havana with a fervent desire to study Physiology, Morphology, Biology and every other branch of Medicine. But, they also came with all of the prejudice and stereotypes that had been created about the island. 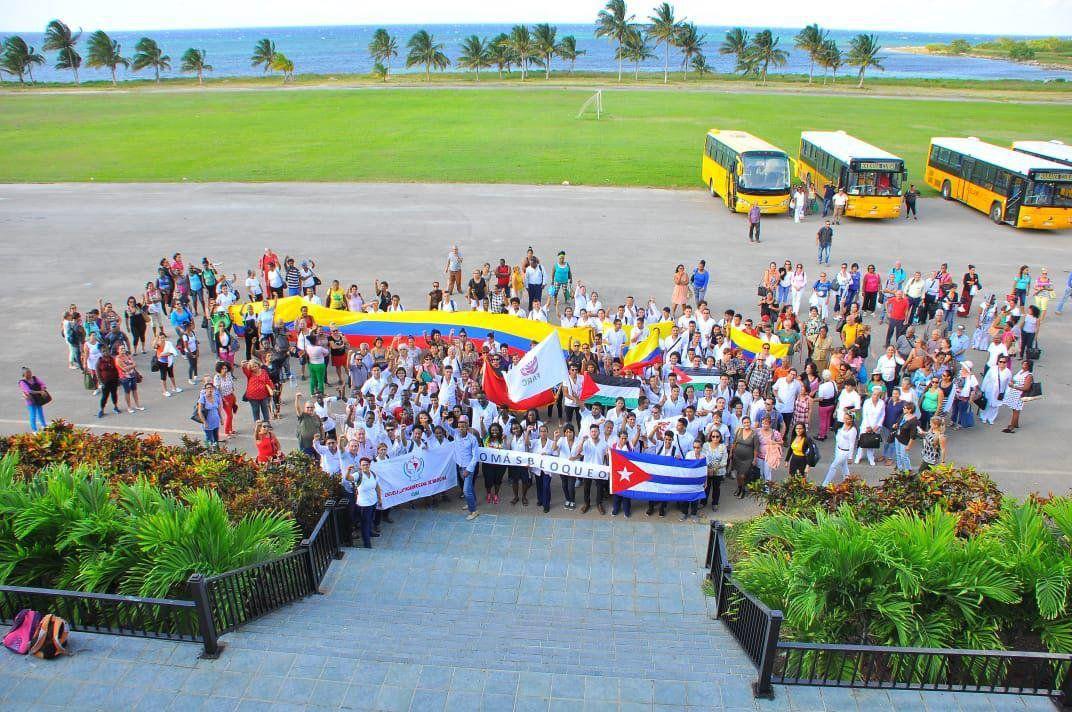 Wow, they don’t have churches in Cuba!

That’s what Ebeliton was told, a peasant from Colombia’s far north, who began the program a year before Carlos. “Careful, they’re all atheists. They all have to dress the same,” he was told before coming to Cuba. Then, he realized that not only were there churches, but that people dressed in all the different colors and styles they wanted to.

Other Colombians came with similar preconceptions, 16 and 17 year olds who had never been to the island and possibly never outside their birth country. “The only thing I could see before traveling, were some really pretty pictures of the university. But, none of that helped to offset the huge shock I had when I arrived,” Juan Carlos tells me, laughing.

Valbuena stepped foot in Havana for the first time in April 2006. He arrived in the men’s dorm at night. He could only see silhouettes of what the dim yellow lights in the corridor could cast their light on.

Sebastian, one of the old students, was waiting for him at the tower entrance. “He told me: You’re going to spend two and a half years here. Choose a bed on the first floor. Let’s go,” he remembers.

When he reached the dorm’s corridors, he could see the bars and clothes hanging on the window frames. A prison environment that terrorizes anyone that knows they are going to live there for two years.

From one moment to the next, people in their rooms began to hit the bars with all their might. Accents from different countries cried out: “you’ve reached hell”.

Juan Carlos stopped in his tracks. “Where am I?” he thought while walking through that din. “Sebas calmed me down and told me: this is the welcome they give newcomers. The so-called primiparada.”  I told him: “It seems traumatic. But eight days later, when the new students came, I was there on the first floor, hitting what I would then discover were aluminium shutters, and saying that same nonsense.”

The day after I arrived, the instructor of the men’s tower, Jose Fonseca, sorted out the panic of the “primimaros”. He made them feel supported and assured them that this was an experience that was going to mark their lives. “And, that’s what happened,” he tells me. 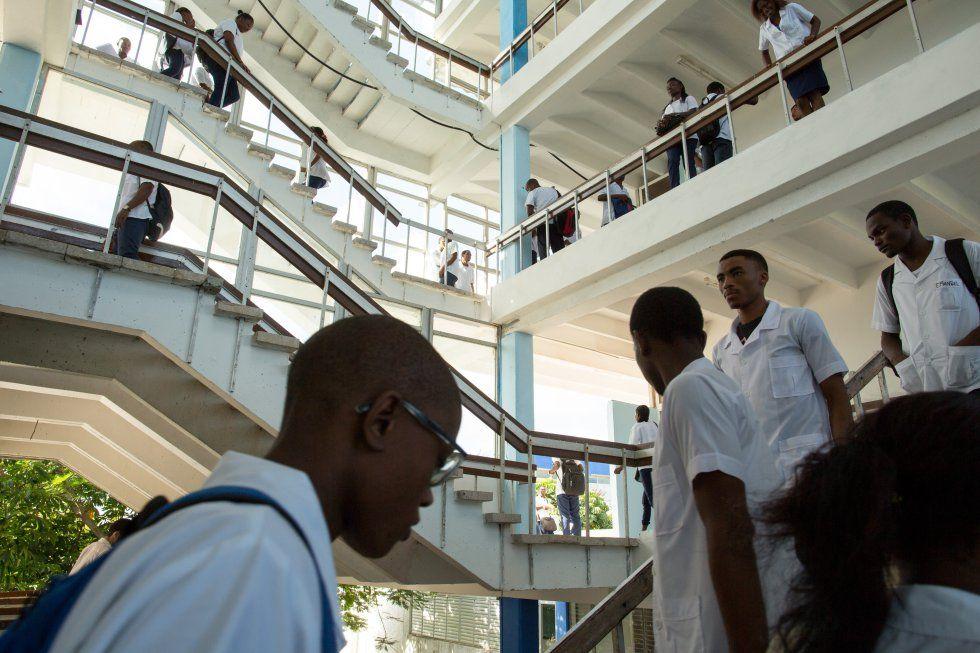 Students spend the first six months doing what they call a pre-med course, which is a process of adapting to the country’s teaching and social structure. Then, they study the basics of Medicine for two years. Once this stage is over, they are sent to different provinces to share classrooms with Cuban students, for the first time.

Juan was sent to the Sancti Spiritus province, four hours away from the Cuban capital. “The university gives you everything, but I wanted to leave the campus and rent and stay with a family. Renting somewhere and staying with a family ended up becoming something symbolic,” he remembers.

His landlords quickly became Juan’s adoptive family. The warmth of that home was what helped him overcome not being able to communicate with his own family, which was much harder back then due to scarce opportunities to connect in Cuba.

Lurdes and Ernesto were his adoptive parents and they are still in touch with Juan Carlos now, even after six years, waiting to hear about his next steps and anxiously waiting for him to come back and visit.

“After I left the island so many years ago, they still have a room for me.  And every time I go to visit them, they welcome me with the same happiness you get when a relative comes home from abroad.”

Living in Cuba for over six years, students build a connection to the country that lasts forever. There are even some students who returned after graduating, with their partner. Others that chose to stay, took up a second degree program and did a masters.

But, Juan Carlos decided to return and tackle the Colombian Health System: with its worker contribution brackets, IPS, EPS and other terms that were like Chinese to him in the beginning.

When I ask him about the bad things he might have experienced on the Caribbean island, he answers diplomatically. “I’m not saying Cuba is a paradise. It’s true that some technological and internet advances need to be made, but I would change all of that for tranquility.”

Cuba held onto Juan Carlos ever since he left and hasn’t wanted to let him go.

When he returned to Colombia, he began to pick out places where he could feel like he was in Cuba, even if it were just for a moment. He sometimes goes to eat lunch at the Ilhe-Habana restaurant where he is served by a Cuban who, with his dishes, makes him feel like he is with Mrs. Lurdes in Sancti Spiritus. He doesn’t miss a single event that has to do with Silvio Rodriguez and he always eats his Colombian scrambled eggs (with onion and tomato) with beans and rice and roast pork.

[This article was written as part of the 3rd generation of the LATAM Network of Young Journalists from Distintas Latitudes. It is being published on el TOQUE as part of a collaboration between Cuban and Latin American media]