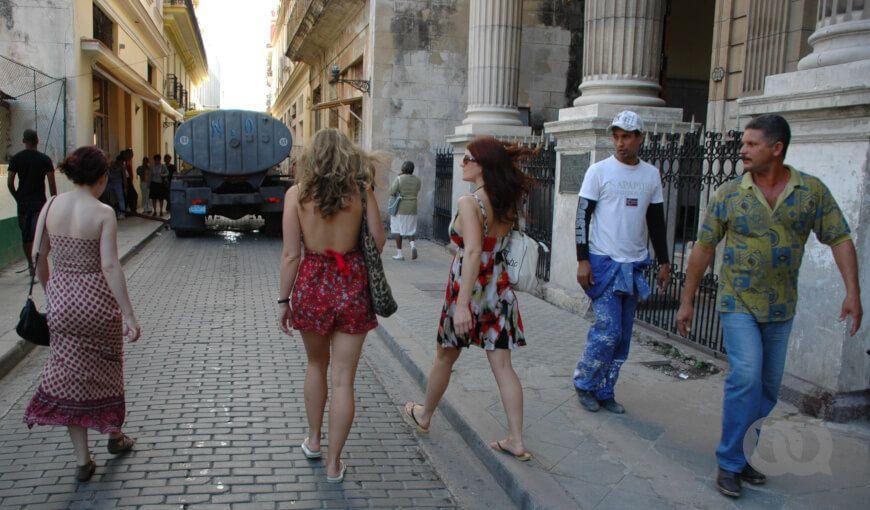 HAVANA TIMES – Less than three years ago, the #MeToo movement opened a Pandora’s box for everybody, proving just how frequently and intensely women suffer sexual harassment. The most high profile cases with the most impact have taken place in workplaces, especially in the film and showbiz world. Many famous celebrities with platforms were pointed out, denounced and taken to trial.

I’m talking about sexual harassment on our Cuban streets, every day, in front of ordinary people, which can range from a discreet wolf whistle, to physical contact; from compliments to exhibitionism or stalking.

This is the subject that the first podcast of Voces de Matria, “a conversation between friends” of just over half an hour, covers. Journalist Milena Recio talks to researchers Alina Herrera and Ailynn Torres about what practices are considered sexual harassment, why they are an expression of gender inequality and where it normally takes place.

Alina Herrera, a lawyer, explains that “street harassment is a form of gender violence of a sexual nature that is practiced and takes place in public spaces, where perpetrators restructure their domination over the female body.” Street harassment proves that outside of private spaces, of behind closed doors, there are also places where men and women don’t walk in the same way, or live equally.

Identifying sexual harassment on our streets

Psychologist Ailynn Torres explains that a key feature of this harassment is the one-way nature of this act. Situations that are not based “on any kind of reciprocity. It is an action of one person against another, normally a man against a woman.” Plus, access to the female body, which “might be symbolic [phrases or gestures] or real [physical contact, blocking their way…], does not come with consent, nor is it sought or reciprocated.”

Alina adds that you can feel afraid, although many women describe their reaction as unease or being annoyed. Furthermore, the fact that these situations can escalate and turn into another kind of attack creates a feeling of being unsafe and threatened.

Research has been carried out into how women deal with different elements in spaces, which are connected to their own safety. “The street as a place where you have to extra precautions,” Alina explains.

Public transport, corridors, dark landscapes, deserted or leafy areas, places where there aren’t many residential homes, some parks, solitary beaches… There are a series of places which, from their own experience or shared knowledge, women have identified as dangerous places for them and so, they limit their movements as a result.

In a woman’s education, “the subject of maybe being sexually abused is constantly talked about,” Ailynn explains as girls become aware, from a very young age, that they may suffer sexual violence, and this is lacking in boys education, she adds.

The street shouldn’t be more dangerous or uncomfortable for women

When the subject of street harassment is being discussed, an argument to defend compliments as something cultural and natural often pops up: “it’s the way we are, it’s a custom of a heated land like ours,” “Cuban women like it,” etc.

Ailynn insists that street harassment happens, to different gradients, all over the world. “Lots of the time, it is taken as a feature of national culture, and you find the same explanation the world over.”

She adds that “the other thing is that perpetrators are identified as people with some kind of mental health disorder. It’s just another myth to justify the situation.”

The naturalization of an uncomfortable situation – at the very least – for a woman contributes to the idea that this dangerousness is something that is a given, and not the result of social constructs.

“If you think it is natural, you think that you as a person should be who is designing strategies to tackle it”, and these are normally “strategies that reproduce this fear, because they are survival tactics”: change the way you dress, avoid being out at certain times of the day or in certain places.

According to the Stop Street Harassment project, surveys by Gallup in 143 countries show that men tend to state a lot more that they feel safe walking at night in their neighborhoods than women do.

Even with Cuba’s considerably low crime rates when compared to other countries in the region, Ailynn proposes that we ask ourselves how can Cuban women have equal opportunities of movement as our male counterparts in the same physical space.

“Our experience of walking in the city is completely different,” she says. Is it fear that women are forced to map out certain routes in order to escape harassment? An international study published in 2018 revealed that 40% of women avoid places where they have suffered harassment.

Yositecreo en Cuba (Yes I believe you in Cuba) is a digital platform that provides support to victims of gender-based violence, and it is launching a call to create a collaborative map against street harassment.

Women from different places, of different ages and with different experiences are providing their testimonies to help map places that are dangerous for their gender. There are more than 240 comments on their Facebook post alone. The collective is now working on collecting and verifying the information shared.

Mapping, geographically identifying where harassment takes place most frequently “not only gives visibility to hotspots, but to the magnitude of the problem. When you look at the map and see how many places there are that harassment tends to take place, we are talking about a public problem that needs a solution. The whole system needs to respond,” Alina explains.

In mid-July this year, Costa Rica passed a law that defines street harassment as a crime and punishes it with jailtime and fines. Anyone who masturbates or shows their genitalia in public will be sanctioned with a 6-month jail sentence; while wolf whistling or gestures with a sexual connotation can lead to a fine. There are other international precedents; the debate is only beginning in Cuba.